Another Rip daily from the period of Indrajal Comics. This particular strip was published in the Indrajal Comics as a 2nd story(Vol. 25 No. 38-39; 1988 -  Bengali title was "Satarka Pratishodhdata(সতর্ক প্রতিশোধদাতা)" - I don't have the English version of these Indrajal issues).

Some inside pages from the Bengali Indrajal issues - 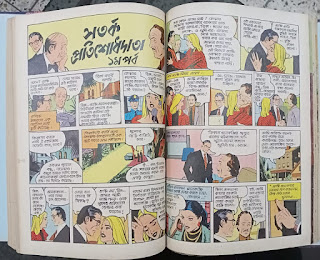 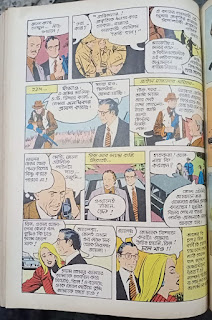 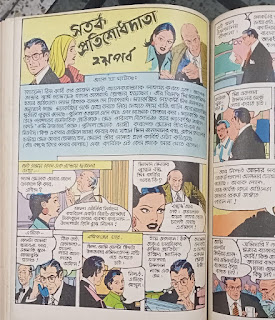 "Amazon Andy" - A recurring-character of the Rip Kirby strips

Every comic-strip has it's own strong-suit regarding the side-characters. In the strips like Phantom, Mandrake & Flash Gordon, we have seen many iconic characters - both friends & foes - reappeared for the several times throughout the respective periods of these strips. In the Rip Kirby, on the other hand, we have seen many colorful one-off characters in every new adventure and only few of them have made multiple appearances. In the Raymond's era, we were introduced with Pagan Lee & Mangler(personally I felt he was over used & later plots were repetitive) and in the Prentice era, we have Amur sisters(Tutu & Mumu) & Wiggers(who later became almost a regular character). Relatively lesser known but another interesting recurring character was "Amazon Andy".

Amazon Andy was introduced in a 1970 strip titled "When Rubber Turned to Gold"(IDW title; D085), as a guide of the great Amazon rainforest. Rip and his friend were looking for a guide for their treasure hunt, and that's how Andy joined with them(Andy was first mentioned, as well as seen, in the strip dated 10-14-1970). 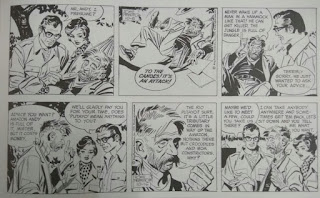 While little rough and gabby at the exterior, old Andy was gradually revealed as a friendly & efficient guide. And at the end of the adventure, they have parted as friends(and later reunited for few more time). 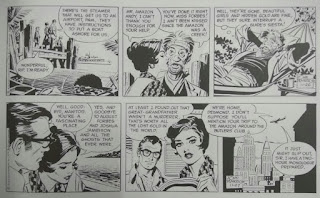 Now, as Rip Kirby was introduced in the Indrajal universe on 1982, so we couldn't have this adventure there but fortunately, when Andy reappeared, quite unexpectedly in the Alaska as 'Bush-pilot', that strip(D139 - The Maluk Indians) was reprinted in the Indrajal on 1986 as the 2nd story in the issues of Vol. 23 No. 15-16. 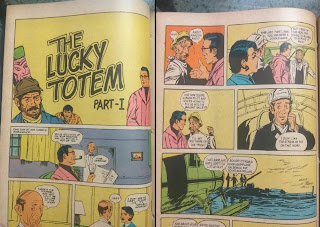 After this adventure, Andy reappeared again few years later in the strip titled "Trip Through the Amazon(D148)", when he found an old map of hidden treasure, published in the Indrajal on 1988(Vol. 25 No. 37). Any adventure around the mysterious Amazon rainforest has to be interesting, and this was no exception! Indrajal fans were fortunate to read the colored book-version of this engrossing tale(also the fellow treasure-hunter "Pamela Forbes", who was introduced in the same 1970-strip with Andy, returned in this strip. So it was kind of re-union for all of them!). 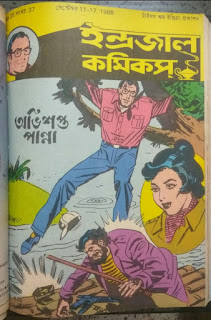 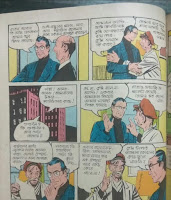 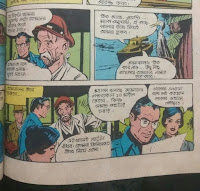 In fact, in the strip dated 4-30-1987, Rip made a reference of their previous adventures in the Alaska & Amazon.

A few strips thru the journey..

While this was the last time we have this fascinating man in the pages of the Indrajal, Amazon Andy returned again in the '90s strips(D179 & 190, respectively).

A comparative-study of the reproduction quality of Modesty Blaise dailies, from the various publications

I have already mentioned in my last post on Modesty Blaise that reproduction quality was variable in the two MB series of Titan, and with these, I am also adding Comic Revue's output as the 3rd reference.

I) Panels(ex. 1-2) are taken from the story "The Galley Slaves" (D014/1968):
In the first example, Jim Holdaway's detailed work has been reproduced perfectly in the Old Titan(OT) #3, and you can even notice their subtle facial expressions clearly. Yet, in the same panel from New Titan(NT) #5, you can't visibly find any of those subtle, detailed lines. Rather, everything has been badly smudged and as a result, everything is very unclear. A classic example of two different source materials used by the same publisher!
In the 2nd example, the NT version is heavily smudged while the same panel was reproduced in pristine condition in the older version. And if you check your physical copy, these will look even better than these images. 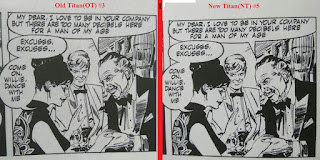 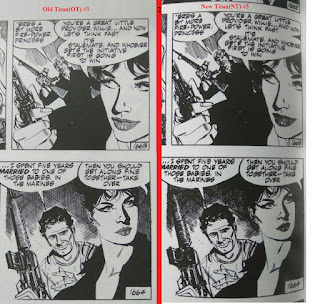 (Other than the inferior source material, the nature of the page-stock used is responsible for the final outcome. It's a well known fact that old comics, specifically old newspaper strips, reproduced better on the matte paper than on the glossy surface. So it's no surprising fact that matte was used in the OT series, while glossy stock was used in the 2nd series.)
II) Panels(ex. 3) are taken from the story "The Green-Eyed Monster" (D020/1970-71):
As mentioned in the I), you can see the obvious gulf in the quality of reproduction between the same panel from the two different Titan series, in the 3rd example. Reasons are the same as mentioned in the previous example. 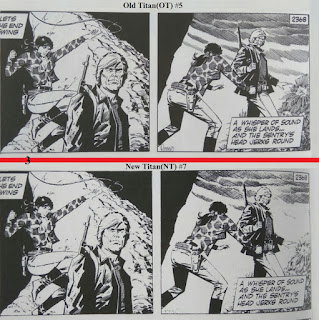 III) Panels(ex. 4-6) are taken from the story "La Machine" (D001/1963):
This time, a comparison between CR & OT.
I read this story in CR first and I should admit that I didn't notice those distant high-rises visible through the window of Modesty's penthouse amidst the darkness(ex. 4)! I have noticed them only when I re-read the story in the pristine Old Titan version. Similar things can be observed in the 6th example, while in the 5th, you can notice almost similar quality of reproduction in both versions, barring CR's was little smudged, but negligible. In general, CR's output was better than the Titan's 2nd series, still falling back compared to Old Titan's reproduction, mostly because of their cheap newsprint stock quality, similar to Frew. 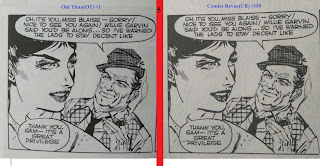 --------------------------------
I could have gone on and added multiple examples, but I do believe these comparisons are enough to understand the variable quality of reproductions are present in the different MB series. So for new readers, choose your books carefully.
Posted by HojO at 8:13 PM No comments:

Another Rip daily and this time from the period of Indrajal Comics. This particular strip was the penultimate Kirby adventure published in the Indrajal(Vol. 26 No. 19; 1989 -  titled "The Cunning Scorpion"). Incidentally, Bengali version of this Indrajal - titled Kakra-bicher Hul(কাঁকড়া-বিছের হুল ) - was one of the earliest Indrajals I have purchased when I have had restarted the Indrajal-hunt, some around 20 years ago. Happy memory! :-)

Anyway, back to the story, it was a nice thriller, all was happening around a Caribbean casino. Like most Rip Kirby stories, there were some memorable one-off characters. Like Nina, who helped Rip to nab the frauds, and played as his better-half throughout the story!

The cover & some inside pages of the Bengali Indrajal issue... 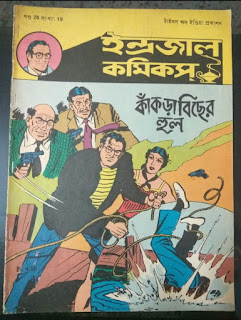 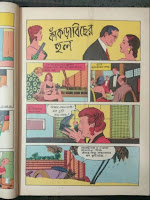